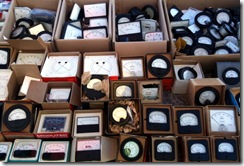 In the spring an old man’s fancy lightly turns to thoughts of vacuum tubes strewn across the De Anza college parking lot, and thankfully the Silicon Valley Electronics Flea Market is there to accommodate. I’ve noticed the days getting longer and it’s just about time to set our clocks forward, but I was caught completely by surprise by the return of the flea market. Thankfully folks as close by as Sunnyvale and as distant as NYC were tweeting about it last night so I forced myself to bed by 1AM so I could make the early morning trek to Cupertino.

I wasn’t kidding about the old man part. In case there was any doubt about the target demographic, you should know that the flea market opens “pre-dawn”. That’s the actual statement of when it opens from the website. They do make a half-hearted concession to those of us who need something more concrete to enter into our calendars with the clarification that the opening is “around 5:00 AM”. Emphasis on “around”, presumably, because they also say vendor spots are handed out on a first-come first-served basis and there’s definitely a hierarchy of quality in the spaces. 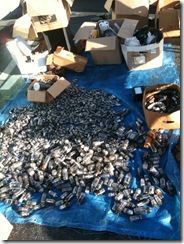 I rolled in around 7:30 to a packed parking lot and started scavenging. One of the first places I saw was the stall pictured to the right. It was literally like someone just poured a few hundred vacuum tubes out of the back of a dump truck. There were all shapes, sizes and vintages. It was beautiful. The vendor seemed happy I decided to take a picture and he pointed proudly to the pile saying “There’s something for everyone in there.” Within the context of the particular group of folks assembled in that particular parking lot on that particular morning, truer words were never spoken. When the day is over does he pack them up with a broom and a dustpan – if not, I don’t want to know the truth. I can’t imagine it any other way.

I didn’t need anything specific, so I spent the morning browsing. The word “need” is a poor one to toss around carelessly here. While it is true I didn’t need any specific parts for a project, I did feel need but more in the way a character from a William S. Burroughs novel might. Vintage radios, 19th century scientific instruments and antique telephones all sang their siren song to me but the last thing I need is another hobby/addiction so I stuck with fairly practical purchases. 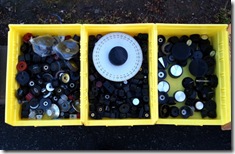 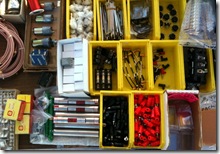 I got some really nice knobs from the knob guy (specialization, here as in the Serengeti Plains, is the key to survival). My favorite precision machine parts guy wasn’t there, but I did find another source to pick up some stepper motors and ballscrews to do some linear motion projects. I also got some proto-boards and PCB drill bits from one of the large corner vendors who is always there. 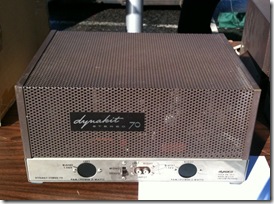 Like any flea market, you’re expected to haggle and purchasing more than 1 of any item is an automatic discount. I had the fastest and most successful haggle ever today. There was a vendor with a box of LCD display boards – they had 3 buttons and a 16×2 character LCD display on them. I asked how much and was told $3 each by one guy, then an older guy (the owner?) swung by and said he’d go $2 each if that was OK with me. So I said I’d make him feel even better and buy them for $1 each. We settled on 4 for $5 and the entire negotiation took about 7 seconds. The joke’s on me, however. When I got home I opened up my “LCD Panel” drawer to discover 2 of the exact same part sitting in there. I must have gotten some last year from the same guy, but I almost certainly got a better deal this time around so I’ll take that small victory.

There’s usually some familiar faces to be seen and I ran into Garrett from macetech.com who makes smart RGB LEDs I use a lot. He told me about some projects he did for the Olympics – those glowing floating colored orbs in the closing ceremonies among other things. What I didn’t see at all this time around was any vinyl LPs, so my wife didn’t get anything. 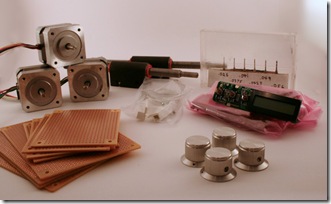 If you live in the Bay Area and don’t mind waking up not too long after “pre-dawn” you should make some time the second Saturday of the month to pay a visit: http://www.electronicsfleamarket.com/ 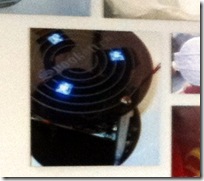 I was at TechShop last weekend working on a project and I noticed a familiar picture hanging on the wall of the lobby. They have a wall collage of member projects on display and one of the pictures is my Spookotron Halloween pumpkin light. I recall sending in a picture of it sometime last year and apparently it’s been hanging there for months without me noticing it. Just about every time I visit TechShop I see someone making something that boggles my mind, so to have one of my projects up there really made my day.

The actual wall collage is itself a member project. One of the TechShop members started the company collagewall and did the prototyping of the wall hanging system at TechShop. They have a novel system for hanging the pictures and a nice minimalist frameless mounting that I find aesthetically appealing.

Although I managed to resist the urge to ask someone to take my picture in front of the wall, I did snap a picture with my cheezy phone camera. I just noticed that they have a much better picture of the TechShop wall at the collagewall website. On the right is a picture of a personal collage I purchased from the collagewall folks for my home office. The pictures are from a talented photographer I discovered on Flickr who gave me permission to use them for this purpose. 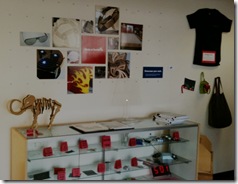 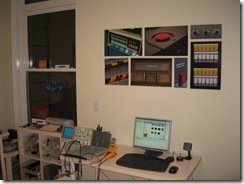