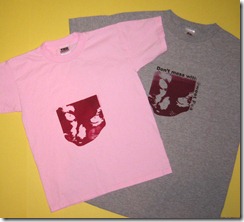 I have many random memories from my childhood – one of them is the time my mom and I tie-dyed some T-Shirts together.

The sentence that you just read, while being completely true, is also potentially a shining jewel of disinformation. Having read it you may have imagined me and my hippie mom barefooted and doing our tie-dying, stopping only to flip over the Janis Joplin record that was playing. This couldn’t be farther from the truth.

I grew up in Orange County, California – known for growing produce and conservative presidents. My parents have a framed photograph of Ronald Reagan hanging on the wall. I was sporting a buzz-cut given to me by my father, who had done a stint as a barber a few decades earlier and hadn’t sharpened his scissors since. So when I say my mom and I were tie-dying, it was not because we were turning on, tuning in and dropping out. It was more likely that the Ladies Home Journal had run an article on it. LSD had long-since jumped the shark by the time tie-dying became commonplace in my hometown.

But it was a fun time and I remember it to this day. I got to make some new memories with my family this weekend as we made our own screen-printed T-Shirts. Of course, I refuse to use anything so crude as hand-twisted fabric and rubber-bands. Around here we like our folk-art at 1200dpi precision or better and that’s what we got.

There are a lot of great Instructables on screen-printing, so I won’t go into details on the process beyond saying it’s essentially applying ink to a T-Shirt through a stencil. So the core problem is creating the stencil you want for your pattern.

My plan was to use my newly-acquired CraftRobo to cut a stencil out of vinyl. It’s the home equivalent of the CNC vinyl cutter I’ve used at TechShop but at a smaller scale. The CraftRobo needs vector outlines to describe the shape to cut, which was going to be generated from a photograph.

I started out with a picture of our cat and converted it to a monochrome image using a straight threshold filter in my image editor. The logic simply says that any pixel with a brightness greater than 50% is white and the other pixels are black. I adjusted the brightness and contrast of the source image first so I would get the best results after thresholding – it was particularly important to get the eyes right with lots of white with slivers of black. I then did some editing of the resulting black-and-white image to clean up the edges and get rid of random detail. 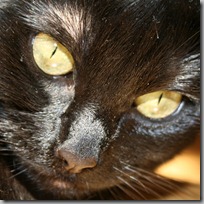 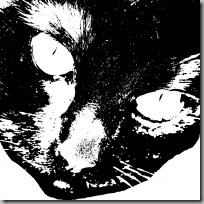 Next I imported the bitmap into CorelDraw and used the outline trace to generate a vector outline version of the bitmap. Because of all the tiny little white dots in the image, I ended up with a fairly complex set of vectors. So I spent a bit of time deleting these tiny little shapes which are essentially unnecessary detail. This speeds up the cut as there’s much less work for the cutter to do and less time with tweezers weeding out tiny pieces of vinyl. Finally I added some text and had completed vector art ready to cut.

Once the stencil was cut it was time to weed out the pieces of vinyl that weren’t part of the stencil. I did this once and removed the completely wrong pieces. In my defense it’s a bit confusing, since you want to throw away the pieces where you want ink to appear so you end up with a reverse image in the stencil. I printed out the image as a cheat sheet and spent about 5 minutes pulling off pieces with a pair of tweezers and got a nice stencil. 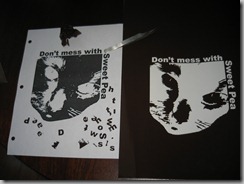 Then I applied the stencil to some transfer paper and it was ready to stick on my printing screen. The image is flipped horizontally at this point because the sticky part of the vinyl sticker is facing up. 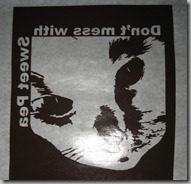 If I had more time I would have made my own printing screen, but instead I bought one at the local art supply store for about 5 times more than the couple bucks it should cost. The company that makes it decided to call themselves “Speedball” which makes me think they don’t do much international business – not exactly a name that guarantees a hassle-free trip through customs. I also picked up a couple colors of fabric ink. I wanted to use different colors for the text and the image, so you can see I’ve masked off the image separately as I’m getting ready to apply the ink. This was a total hassle and for subsequent prints I’m just making separate stencils for the different colors. 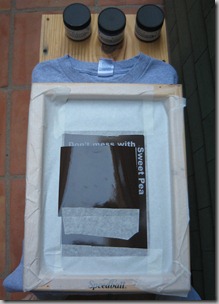 The first print came out OK, but the ink was pretty uneven on the text due to me not being aggressive enough with the squeegee. Also some ink bled through on the side due to some poor making tape around the stencil. But I knew the first one would be rough, so I made my shirt the guinea pig so we’d have the kinks worked out before we did the others. 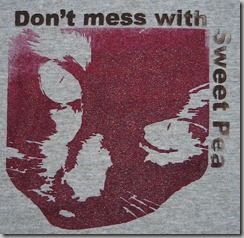 We were flying blind a bit on colors, not really knowing how they would look on the shirts. But by the time we did my daughter’s shirt the combination of good technique and great color combination produced an excellent result. We’ll add some text in a different color later – I’m assuming registration should be simple enough but we’ll see. There’s a ton of places that will print custom T-Shirts so there’s plenty of competition and as a result prices are pretty low. So this DIY project isn’t much of a money-saver, but it was a lot of fun and at least now I can brag about my CNC T-Shirt.

This entry was posted on Tuesday, August 25th, 2009 at 6:46 am and is filed under atoms. You can follow any comments to this entry through the RSS 2.0 feed. You can leave a comment, or trackback from your own site.