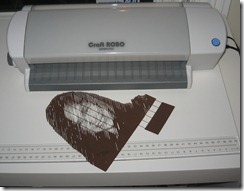 Names and branding matter. My instincts tell me to never drink something called Calpis, so that name is a pretty big hurdle to get over. Having said that, if it tasted really good I’m certain I could get past the problematic moniker.

If you had told me last month how excited I would be about a product with the word “craft” in the name I’d have said you were insane. But a few days ago my brand new CraftRobo arrived in the mail and it’s pretty much the coolest thing I’ve acquired in a long time. Fortunately it’s got “robo” right there immediately after “craft” – the spoonful of sugar to help the medicine go down. It may be a crafty automated 2D paper cutter – but really it’s a razor controlled by a robot and that’s pretty cool no matter what you call it.

Through twitter I stumbled onto some video by Bre Pettis and Jeff Rutzky at http://www.craftrobostore.com/ of the Craft Robo in action. I’ve been using an Epilog laser cutter to cut cardstock and a CNC Vinyl Cutter to make stickers at TechShop, and the Craft Robo looked like it could handle these materials as well. I found one for around $200 new on eBay, so I clearly wasn’t expecting it do anything as intricate as I was doing on machines that cost 10 to 100 times as much. But for the price it seemed like a no-brainer to get and try out.

I started out cutting some simple shapes from cardstock and vinyl just to test it out and I was impressed by how fast it was. It cut out text from vinyl as fast as the CNC cutter I had used before and the resolution was indistinguishable as well.

The tests were so successful that I decided to throw down the gauntlet. I tried cutting one of the more challenging shapes I’ve done on the laser cutter – a photograph cut from cardstock. I literally opened the exact same CorelDraw file I had previously cut on the Epilog and sent it to the Craft Robo. The first thing I noticed is that it took about the same time to cut on both – about 5 minutes. When the job was done cutting I was blown away by how faithfully the Craft Robo had reproduced the photograph. I wasn’t able to find any resolution claims in the specs posted online for the Craft Robo, but there are sections of the image where the cuts are only .02 inches wide and it had no trouble resolving these lines.

The biggest issue was that most of the pieces didn’t completely cut through. The entire job consists of thin strips to be cut out and since the Craft Robo uses a drag-cutting blade that has to rotate to cut it’s not great at cutting sharp acute-angled corners. So what I ended up with was a bunch of slivers that I had to manually weed out using tweezers, whereas on the laser cutter all the pieces except a couple fell out. But for $200 and about 20 minutes of weeding I got a result that is pretty comparable to the laser cut version. 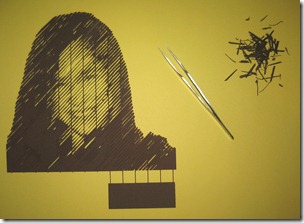 The other major limitation of the Craft Robo is the size of material it can handle, which is limited to about 7” x 10”. I’ve out 5 foot long stickers at TechShop to stick on my walls, which I couldn’t do with the Robo. But these are totally reasonable constraints given the impressive price point.

This weekend I’ll be working on some software to do some more creative halftoning and color separation, which should allow colored photographs to be reproduced with multiple layers of cut cardstock. I haven’t come close to finding the limits of this machine yet and can’t recommend it highly enough.

This entry was posted on Friday, August 21st, 2009 at 6:45 am and is filed under atoms. You can follow any comments to this entry through the RSS 2.0 feed. You can leave a comment, or trackback from your own site.