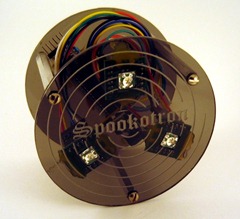 I tried out two new ideas for Halloween this year. One of them was an ill-conceived plan to carve a pumpkin using a Dremel tool. The pumpkin looked OK, but by the end I was covered in microscopic pumpkin shrapnel from head to toe. The other idea was to make an LED pumpkin light, and it turned out great.

I call it the Spookotron and it uses 3 ShiftBrite RGB LEDs to light up the inside of a pumpkin. The LEDs are controlled by an Atmel ATMega 8-bit microcontroller. I chose the Arduino-compatible RBBB from Modern Device because it’s tiny and easy to program.

The idea was to have a variety of RGB lighting effects that would randomly cycle. I’ve never had a pumpkin that can light up green and purple, so this was my year.

It turns out that the inside of a pumpkin conducts electricity pretty well, so some kind of enclosure is needed to keep the electronics away from the pumpkin guts. I was doing this at the last minute on Halloween, so I elected to cut an enclosure from some smoke-colored acrylic scraps I had left over. I cut two discs from the acrylic and screwed them together using threaded aluminum standoffs. The top disc also had holes for the 3 LEDs to poke through. The microcontroller board and LEDs were attached using hot glue, which was the quickest option. 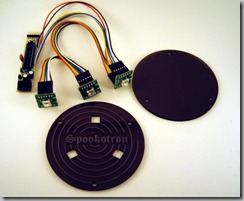 The software has 4 effects that are cycled randomly: lightning, RGB color ramp, fade-in & out from a color and a flickering yellow candle effect. With the 3 ShiftBrites it generates plenty of light. I’m running them pretty bright, so I presume it’s using a fair bit of current. Nevertheless, it ran for several hours on a 9V battery and stayed bright the whole time. I ended up using one inside to light up a window in addition to the 2 others that I had in our pumpkins.

The video below shows the acrylic parts being fabricated on a laser cutter and some of the color effects running on a finished Spookotron.

This entry was posted on Monday, November 2nd, 2009 at 10:20 am and is filed under atoms, electrons. You can follow any comments to this entry through the RSS 2.0 feed. You can leave a comment, or trackback from your own site.