I should probably start by saying I’m not an expert in Buddhist practices or those of just about any other religion. The sum total of my knowledge in this area was picked up from Chinese restaurants, re-runs of Kung Fu and the occasional PBS documentary. Somehow amidst the Honey Walnut Prawns and pledge drives I’ve become aware of an exercise practiced by Buddhist monks that I find fascinating. 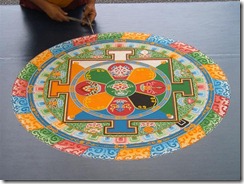 Tibetan Sand Painting is an ancient art where monks creating beautiful and exquisitely detailed pieces of artwork with colored sand. It’s a labor-intensive process that can take days to complete, and the results are amazing. But when the art is completed they simply brush the sand away destroying the image. It’s a metaphor for the fleeting nature of life. That’s always seemed intriguing to me – creating something just to destroy it. Now I’m not sure if this next part is true or not, but I recall hearing that they destroy the artwork the instant it is completed. There’s no sitting around gazing upon their work in awe and high-fiving each other. The point of the creation is the destruction and nothing else. So the logical thing to do upon its completion is to immediately trash it. It’s religious meditation as punk rock. Maybe that’s why this idea is appealing to me.

This practice is appealing to me in theory, that is. There are a lot of things I like conceptually but really it’s the idea I like and not the doing. Flying in an F-16, for example, is an incredibly attractive thing that I hope I’m never rich enough to actually do because apparently every non-pilot who has done it has hated the experience. I can appreciate things that others do without actually doing them myself. I don’t actually need to be destitute and living on a diet of White Russians and bowling alley nachos, because The Dude is out there takin’ ‘er easy for all of us. Similarly, I don’t need to destroy my handiwork because The Monks are out there reminding us all of how fragile our existence is while I watch them on my flat-screen TV from the comfort of my couch.

These thoughts were far from my mind as I started my cutting job on the Epilog Laser at Techshop. It was my first test of my laser-cut paper halftoning technique and I was cutting out a photograph from some cardstock. I created a linear halftone that consisted of a bunch of parallel lines where the thickness of the line varied according to the darkness of the image. Here is a close-up of the vector image I was cutting – if you squint or back up across the room you can see that it’s a pretty good effect.

It’s quite an intricate design that needs to be cut, but fortunately the laser cutter is doing all the work. Several minutes later the Epilog beeped indicating the job was finished and I pulled out the finished work.

Have you figured out where the story is going yet?

I picked up the piece of cut cardstock and for a brief fraction of a second the image of the photograph hung in mid-air before collapsing into a pile of confetti. I immediately recognized my error – each diagonal line was completely separate and thus had nothing to hold them together. I had turned the Epilog into a $30,000 paper shredder. As the pieces of paper fluttered to the floor I was reminded of the impermanence of existence and felt an overwhelming craving for Mongolian Beef. But lunch and enlightenment would have to wait, because I needed to finish my project.

I decided to try a fairly simple fix. In CorelDraw I created a rectangle that was as tall as my image and .02 inches wide. I then duplicated it several times so I had a series of vertical bars and then used the Weld command to join these bars to my image. Finally I trimmed the edges so there weren’t any bars poking out past the edge of the photo. The result looked something like this:

The results came out far better than I expected. The vertical lines were thin enough to not distract overly from the image, but were substantial enough to hold the paper together very well. 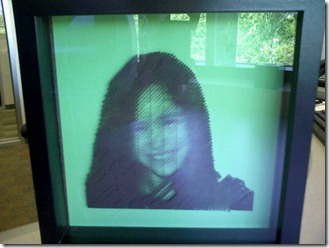 It’s not like you need an advanced degree in topology to avoid a mistake like this. Most of us learned these principles in Kindergarten while cutting shapes from construction paper. It’s obvious in hindsight that the laws of physics apply to a laser cutter just as much as they apply to blunt scissors. But making the mistake is the best way I know to assure you never make it again.

This entry was posted on Thursday, July 23rd, 2009 at 6:40 am and is filed under atoms. You can follow any comments to this entry through the RSS 2.0 feed. You can leave a comment, or trackback from your own site.